I can't remember when I first discovered that records aren't necessarily made by a bunch of musicians in a room playing live. It was before I was a teenager, because I still have cassette tapes that I made of primitive multi-track recordings using my mom's answering machine and our stereo, little-fingered guitar pluckings and piano doodles buried in a wash of static. It can be fun when your kid has learned about what sounds different instruments make to listen to music with them and try to isolate each one, singing or humming along to just the sound they make. For an awesome and fun visual aid, check out the YouTube mixes of Israeli DJ Ophir Kutiel, aka Kutiman. Sampling, looping and layering video footage of dozens of musicians, it's funky, funny, and educational.

What can I say about Guitar Hero? I'm from the generation that grew up with video games, so I don't see them as some kind of awful bogeyman that corrupts the hearts and fingers of our kids, but even I am impressed by the news that music games are inspiring more children to pick up real instruments.   Now there may be benefits for us grown-ups too - former Blondie drummer Clem Burke has announced a study to investigate the health benefits of playing the simulated drums in Guitar Hero: World Tour, to see if the physical exercise of jamming on the virtual skins can help treat obesity and other conditions. Sounds good to me! Read more here: http://blogs.mirror.co.uk/science/2009/02/blondie-drummer-launches-study.html
Read more →
Chicago residents have been grooving to Chic-A-Go-Go since 1996, and if you're not in the Windy City well you're just going to have to follow along from home. Featuring a daffy mix of music, puppets, and most of all little kids dancing their hearts out to all kinds of tunes, it's a celebration every week. I sat down with the shows co-creator Jake Austen to give you the skinny. [caption id="" align="right" width="264" caption="Benjamin Dances with Shonen Knife"]

[/caption] What is Chic-A-Go-Go? For the last 13 years my wife Jacqueline and a crew of volunteers have been doing a cable access show in Chicago where we throw an all ages, genre-free TV dance party. It's like Soul Train or Bandstand, except with 4-year-olds and college students and elderly people moving to punk rock, disco, blues, metal and jazz records. Though it's not totally a kids show we do have a puppet co-host, some great kid dancers, and everything is appropriate for little kids (bands who come on to lip synch sometimes have to make special clean versions of their songs). We've done over six hundred episodes and had close to 2000 guests, including a number of Rock 'n' Roll Hall of Famers and many of our musical heroes, including the Cramps, Cheap Trick, the Shirelles, Neko Case, Hasil Adkins, Rudy Ray Moore, the Effigies, Hanson, the Misfits, GZA from Wu Tang, Andrew W. K., the Pretty Things and the Residents! [caption id="" align="right" width="272" caption="Herc (in masks) go down the world famous El Line with their Chic-A-Go-Go friends"]

[/caption] What were the inspirations for Chic-A-Go-Go? What was your motivation for starting the show? My wife and I always loved dance shows, and we also are huge advocates of independent media (I program public affairs shows on a community radio station and do a zine; my wife is a scholar who studies lost and neglected films, and runs a home movie archive). We loved the idea of cable access (even though we didn't get cable until we had a show) and were always interested in doing something. Kiddie-A-Go-Go not only showed how amazing a dance show for kids can be, but also showed that it doesn't have to be grueling work, or perfect. It can be raw, shambling, and error-ridden and still be just right, meaning the process can be as fun and loose as the product. That lack of pressure, as much as anything else, let us know this was something we could do. [caption id="" align="right" width="275" caption="The Storm Troopers of Dance "]

[/caption] What band/artist were you most surprised agreed to be on the show? I'm more surprised when someone completely refuses to do it. I guess I was really pleased and a little surprised that we got to to do a segment with Phil Cohran, an older eccentric jazz musician (he helped found the AACM and was in Sun Ra's early band), and it was great because after we told him which of his records we were going to dance to he laughed and said we couldn't dance to it because of the time signature, adding "I'd like to see that." And then he saw it because our kids will dance to anything! What band/artist were you most surprised the kids enjoyed? Usually even noise bands or hard rock groups or freeform jazz guys or naughty rappers appearing on the show adjust to make it fun for kids, so that is rarely an issue, everyone makes sure kids will enjoy their performance. But what we love is that once the vibe gets going, our dancers will dance to anything, including Jandek, Christian Marclay and Sammy Davis Jr. Check out Chic-A-Go-Go videos here!
Read more → Queen is coming! Queen is coming! You can stop emailing us, Brian May (kidding, we'd be thrilled). Our newest new-favorite CD, Rockabye Baby! Lullaby Renditions of Queen, is available May 19 and we have a sneak peek for you. Check it out! Producer Leo Flynn II took our clunk and tinkle philosophy to new heights on this one. What say ye: yea or nay? Bohemian Rhapsody: Under Pressure:
Read more → 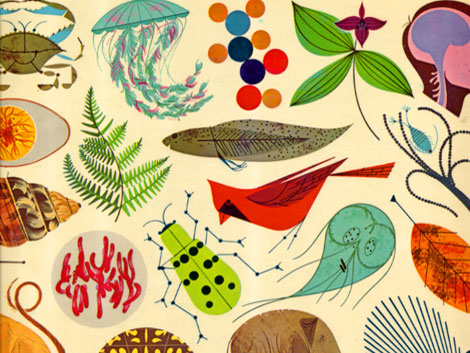 Ohio artist Charley Harper has long been a favorite in this house - his modernist, gorgeous depictions of the animal kingdom are kid-friendly while also being impeccably designed. Working in silkscreen and paint, Harper produced hundreds of amazing illustrations for magazines and science textbooks. Until now, the best way to get his work in your home was by purchasing the enormous Charley Harper: An Illustrated Life, but the $200 price tag is a little discouraging to the casual browser.

Help is here from an unlikely source - Old Navy has partnered with Harper's estate to license his work for a number of products. Our favorite is the flash card set that features 26 unique Harper illos on the front and two huge floor puzzles on the back. And at only twelve bucks, it's a steal.